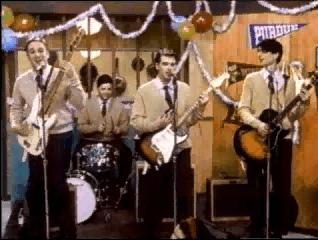 Weezer is a group of four members that was formed in Los Angeles in 1992. In the 1995 video, "Buddy Holly" directed by Spike Jonze, vintage Happy Days footage was intercut with shots of Weezer performing on the original Arnold's Drive-In set. Arguably one of the most popular clips of 1995, it scored four MTV Video Music Awards, including Breakthrough Video and Best Alternative Music Video, and two Billboard Music Video Awards, among them Alternative/Modern Rock Clip of the Year. It reached no. 2 on "Billboards Modern Rock Track Chart".

The introduction of the video was delivered by Happy Days cast member Al Molinaro (Al Delvecchio), and seizing the opportunity to ad lib, Al plugged his hometown--and his words "...from Kenosha, Wisconsin: Weezer!" ended up in heavy rotation on MTV for weeks during 1995.

The video featured footage from episode #53 (They Call It Potsie Love) as well as several other episodes. There is a scene where Joanie is peeking out from behind the railing in the back of Arnold's in the video.

another photo from the Weezer video