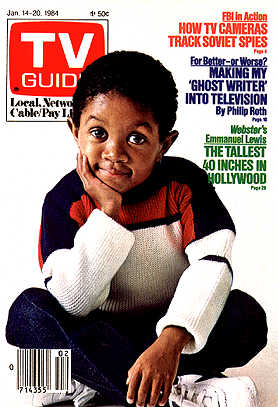 Emmanuel Lewis was 40 inches tall, cute as a button, and the comic find of the 1983-84 season.   He was 12 years old, but looked half that.   A network executive spotted him in a Burger King commercial and signed him on the spot--then ordered his writers to think up a series for him fast, before the little fellow grew another inch.

The series they came up with may have been a bit farfetched, but it did showcase young Lewis' talents.  George was a burly former pro football player turned sportscaster on WBJX-TV, Katherine a fluttery socialite with a career as a consumer advocate (later she became a psychologist).   They had met on a Greek cruise--and though total opposites--married on impulse.   George was generally an impulsive guy.   No sooner did they arrive back in Chicago than they discovered at their door the result of one of George's past impulses: a cute black seven-year-old named Webster.   It seemed that George was Webster's godfather.   He had promised the boy's parents, teammate and best friend Travis and his wife Gert, that if anything ever happened to them he would look after their child.   Well, something did (they were killed in a car crash), there was no next of kin, and here was Webster.

Adjustments were made by all, particularly Katherine, who was totally inept as a housewife or mother.   Webster was cute enough to melt even her Tiffany heart, however, when he told her why he always called her Ma'am--"cause it kinda sounds like 'mom.' "  (Awwwww, sighs the audience.)   As for George, beneath that hulk beat the heart of a pussycat.   Most of the stories in this syrupy series were of the "Webster can't sleep without his teddy bear" variety, but a few dealt with more serious subjects such as retarded children, and the day they had to explain to Webster that his parents were not just "away."

Jerry was Katherine's sarcastic male secretary, Cassie and Bill owned the large Victorian house into which the Papadapolises moved in the fall of 1984 (they later bought it), and Phillip was Webster's uncle--who arrived planning to fight for custody of the little guy, much to everyone's discomfort.   He later moved to Hollywood to start a movie career.   A major change occurred in the fall of 1987 when George's brother and sister-in-law decided to relocate to Nigeria to work on a UN agricultural project, and their 14-year-old son Nicky moved in with George and his family.   Nicky and Webster got along famously, and the older boy provided Webster with the "brother" he had never had.

For more facts about the show and cast members, please see the Did you know? section.