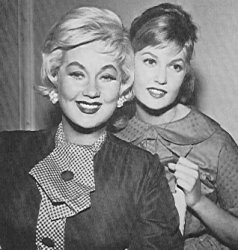 The Ann Sothern Show Message Board Katy O'Connor was the assistant manager of the plush Bartley House Hotel in New York. Her first boss, Jason Macauley, was transferred to Calcutta in the March 9, 1959, episode, but Katy's hopes of succeeding him as manager were torpedoed when James Devery arrived to fill the job. Katy's secretary, roommate, and best friend was Olive Smith, who developed a romantic interest during the 1960-1961 season in the person of dentist Delbert Gray. Don Porter and Ann Tyrrell had been Ann Sothern's co-stars in her previous series, Private Secretary, and they joined her here in amusing tales of the problems encountered in running a big-city hotel.

LOS ANGELES (AP, March 16th 2001) - Ann Sothern, the blond beauty who starred as the movies' wisecracking ``Maisie'' and as the busybody Susie McNamara in the 1950s TV series ``Private Secretary,'' has died at her Idaho home. She was 92.

An accomplished singer as well as comedian, Sothern appeared in MGM musicals such as ``Lady Be Good'' and ``Panama Hattie.'' She was in a second TV series, ``The Ann Sothern Show,'' as the assistant manager of a plush New York hotel.

Only in 1988 did she win recognition from the Motion Picture Academy. She was nominated for an Oscar as supporting actress in ``The Whales of August,'' which also starred veterans Bette Davis, Lillian Gish and Vincent Price.

``She was one of those people who I think was never, ever appreciated in her own time,'' Robert Osborne, a columnist for The Hollywood Reporter and host of Turner Classic Movies cable TV network, said on Friday. ``There was nothing she couldn't do. Light comedy was her forte, but she also was a good singer and the camera loved her.''

Her first Columbia film was the lightweight 1934 musical ``Let's Fall in Love.'' She followed with more undemanding roles at Columbia and RKO, where she and another contract player, Lucille Ball, commiserated over their lack of progress. After RKO dropped her, Sothern waited a year until she could find a worthy role.

``Trade Winds'' in 1939 offered her sophisticated comedy (dialogue by Dorothy Parker) and brought rave reviews and an MGM contract. Her first MGM film, ``Maisie,'' had been designed for Jean Harlow, who had died in 1937. It cast Sothern as a flip one-time burlesque dancer with a warm heart and a failing for man trouble. Said Variety: ``She's sexy, smart and resourceful - and decidedly likable throughout.''

MGM also starred her in musicals and comedies such as ``Dulcy,'' ``Words and Music,'' ``Three Hearts for Julia,'' ``Thousands Cheer'' and ``Fast and Furious.'' In ``Lady Be Good'' she sang Kern-Hammerstein's ``The Last Time I saw Paris,'' which won the 1941 Academy Award as best song.

After leaving MGM, she proved herself as a serious actress in Joseph Mankiewicz's ``A Letter to Three Wives,'' Oscar winner for best picture of 1949. A siege of hepatitis kept her out of acting for a year, then in 1952 she launched her television career with ``Private Secretary.''

``Like all the other stars at MGM, I had been living in a glass cage,'' she said after facing the rigors of TV schedules. ``Life was beautiful there; everything was done for us. I had forgotten what real work was.''

``Private Secretary,'' in which she played the nosy Susie McNamara, was an immediate success, lasting from 1953 to 1957. The star quit after a dispute with the producer, and in 1958 she began ``The Ann Sothern Show,'' playing an assistant manager of a big-city hotel. She worked at the former RKO studio, newly owned by Ball and Desi Arnaz.

After the series faded in 1961, movie roles became scarce, studios being wary of hiring TV stars.

Wanting to return to serious roles, she studied drama with Stella Adler and then played a prostitute in ``Lady in a Cage,'' a political busybody in ``The Best Man,'' a blowzy has-been in ``Sylvia.'' Her other films included ``Chubasco,'' ``The Killing Mind,'' ``Golden Needles'' and ``Crazy Mama.''

She also had one more recurring role in a TV series, a most unusual one: She was the voice of the woman reincarnated as an antique auto in the 1965-66 sitcom ``My Mother the Car.''

She was born Harriette Lake in Valley City, N.D., on Jan. 22, 1909. Her mother sang in concerts, and as a youngster Harriette learned piano and trained as a lyric soprano. Harriette was 6 when her father deserted the family, and her mother moved her three daughters to Minneapolis, and later Los Angeles.

Harriette made her film debut in Warner Bros.' early talkie, ``The Show of Shows,'' in 1929. After a few small roles, she went to Broadway for the musicals ``Smiles,'' ``Everybody Welcome'' and ``America's Sweetheart.'' She was appearing in ``Of Thee I Sing'' when Columbia Pictures signed her.

Columbia boss Harry Cohn decided there were too many Lakes in movies. She became Ann Sothern, taken from her mother's first name and the distinguished actor E.H. Sothern.

Sothern was plagued with health problems in later years. In 1974, a fake tree fell on her during a play, fracturing a vertebra and damaging nerves to her legs. Years of operations and treatments followed.

She was married to bandleader-actor Roger Pryor from 1936 to 1942 and to actor Robert Sterling from 1943 to 1949. Both marriages ended in divorce.

Sothern moved to 1984 to Ketchum, where she had visited to ski since the 1940s. Her only child, actress Tisha Sterling, had a house nearby and was with her when she died.

The Ann Sothern Show Message Board