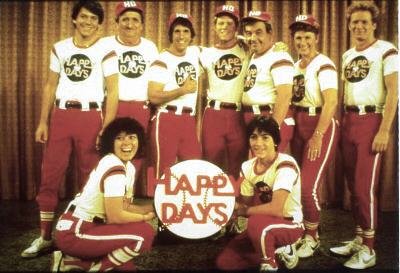 From about the mid 1970's to the early 1980's, there was a Happy Days softball  team that included many of the cast members, writers, and other people related to the show.  It was Happy Days creator Garry Marshall's idea to have a softball team as an activity to get everyone that worked on the series together and be almost like a big family. Many other actors/actresses would play on their team  including Tom Hanks, Robin Williams, Tony Danza, Penny Marshall, and Rob Reiner.  They would often play other celebrity teams across the US in Major League baseball parks before professional games with the proceeds benefiting various charities.  On a few occasions they would play outside of the U.S. as they made a trip to Germany and Okinawa, Japan for the troops.  Henry Winkler was reportedly a great pitcher for the team.  In addition to the Happy Days softball team, I  believe there was also a team for the Laverne & Shirley cast. There are some highlights of the H.D. softball team playing in New York's Shea Stadium (home of the New York Mets) in the 1992 Happy Days Reunion show.   There are apparently some programs available from when the softball team played available, but they are somewhat rare and hard to find.

Erin Moran sent us these words about the HD softball Team:  "I remember the Happy Days softball team. I loved it! It was a lot of fun.We all traveled together to all the baseball fields around the United States.We would play right before the real baseball games would start.  Scott and I missed one softball game that was in Germany because at that time we were doing Joanie Loves Chachi.", Erin

These pictures were taken before a California Angels game in Anaheim, California.  Click any of the thumbnails for the larger, clearer image:

The following pictures are from the program that was given out at the "Happy Days" Cast vs. Chicago Media All-Stars softball game at Wrigley Field in Chicago, Illinois on August 17, 1979.   Click any of the thumbnails for the larger, clearer image:

Photo of the team at Candlestick Park in San Francisco, CA in 1977:

If anyone has memorabilia from the softball team such as programs, baseball caps, jerseys, etc. that they would be interested in selling or trading - please e-mail me.   I have many extras of the above program from Wrigley Field if you are interested in them.

Also, if anyone has any videotaped footage of actual games (or highlights) or anything like that, please e-mail me as I would be very interested in obtaining a copy.

I hope that you have enjoyed this brief history of the Happy Days All-Star softball team.  If you have any additional information, memories, or pictures - please e-mail me.   Thanks.