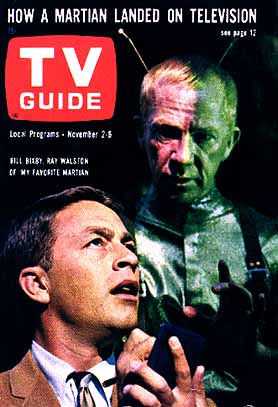 My Favorite Martian on DVD: Buy My Favorite Martian - Season One - Collector's Edition on DVD Buy My Favorite Martian - The Complete Second Season on DVD Buy My Favorite Martian - The Complete Series on DVD Out of this world laughs with the original 1960's supernatural sitcom smash! MY FAVORITE MARTIAN marked the beginning of television's fascination with fantasy-themed comedy series, originally airing on CBS-TV from 1963 to 1966.

Debuting in the top ten upon its premiere season, MY FAVORITE MARTIAN stars Bill Bixby (The Courtship Of Eddie's Father, The Incredible Hulk) as newspaper reporter Tim O'Hara and Ray Walston (Picket Fences) as the Martian whom Tim discovers and passes off as his Uncle Martin. Pamela Britton plays their snoopy landlady, Lorelei Brown. In loving tribute to composer George Greeley, La-La Land Records presents his wonderfully whimsical orchestral score to one of the most beloved 60’s sci-fi sitcoms of all time, MY FAVORITE MARTIAN, starring Ray Walston and Bill Bixby. An acclaimed jazz musician as well as Film/TV composer, Mr. Greeley crafts the perfect musical accompaniment for MARTIAN, capturing all of its charm and excitement. In depth, exclusive liner notes include a note from Mr. Greeley himself. This is a Limited Edition of 3000 Units.

For more information and to purchase online:

My Favorite Martian on TV:

The AmericanLife TV Network (formerly The GoodLife TV Network) aired My Favorite Martian for three years. They stopped airing the program in October 2007.

Have a question about My Favorite Martian, comment, trivia question, etc.? Then post your message on the:

My Favorite Martian Message Board On the way to cover an assignment for his paper, The Los Angeles Sun, reporter Tim O'Hara stumbled upon a Martian whose one-man ship had crashed on Earth. Tim took the dazed Martian back to his rooming house to help him recuperate, while thinking of the fantastic story he would be able to present to his boss, Mr. Burns, about his find. The Martian, however, looked human, spoke English, and refused to admit to anyone but Tim what he was. Tim befriended him, passed him off as his uncle, and had many an interesting adventure with the stranded alien. Uncle Martin had little retractable antennae, could make himself invisible, was telepathic, could move objects just by pointing at them, and had a vast storehouse of advanced technological knowledge. While he was trying to fix his ship he stayed with Tim in Mrs. Brown's rooming house. During the first season, Mrs. Brown's teenage daughter Angela was a cast regular. The following year policeman Bill Brennan joined the cast as Mrs. Brown's boyfriend, a threat to Uncle Martin on two counts--not only was he always a potential discoverer of the Martian's true identity, but uncle Martin had become romantically interested in Mrs. Brown himself and looked upon Brennan as a rival for her affections.

This four-episode compilation of the 1960s-era comedy starts off with a two-parter which sends extraterrestrial Martin (Ray Walston) and his "nephew" Tim (Bill Bixby) back in time to the 1800s in "Go West, Young Martian, Go West." After wagon-train and riverboat rides and battles with Indians and an overzealous sheriff, the pair make it back to the present only to meet a time-traveling Leonardo Da Vinci in "Martin Meets His Match." The duo help resolve Da Vinci's theft of his own Mona Lisa, and then it's back in time to undo Tim's bungling of the tribal sale of Manhattan Island to the Dutch in "Pay the Man the 24 Dollars." The chemistry between the finger-wigglingly proficient Walston and slightly daft Bixby makes for fun family viewing, but be aware that stereotypes of Native Americans abound in the second and fourth episodes, not the least of which is their portrayal by Caucasian actors with a lot of makeup.

For more information and to order on VHS:

For more information and to order on DVD: LOS ANGELES (Reuters, 01/02/01) - Tony and Emmy award-winning actor Ray Walston, who starred on stage and screen as the devil in ''Damn Yankees'' and was famed for his TV role as the extraterrestrial Uncle Martin in ``My Favorite Martian,'' has died at age 86, his agent said on Tuesday.

Walston, who specialized in playing crusty and canny characters, including the judge on the acclaimed TV series, ''Picket Fences,'' died on Monday at his home in Beverly Hills after a short illness, agent Harry Gold said.

His last screen appearance was in the Oct. 15 season premiere of the CBS hit show ``Touched By An Angel.'' He played a wealthy entrepreneur who cuts his son (Richard Chamberlain) off from the family fortune to teach him there are more valuable things in life than money.

Walston won a Tony Award for best actor in a musical for his Broadway performance as Mr. Applegate, the Devil, in the 1956 hit ``Damn Yankees,'' about an aging baseball fan who sells his soul to help his hapless team, the Washington Senators, win the American League pennant from the unbeatable Yankees of the 1950s.

Both Walton and actress-dancer Gwen Verdon, who played the seductress Lola (''Whatever Lola Wants, Lola Gets''), recreated their roles for the 1958 film adaptation of the musical. Verdon died last year.

Also in 1958, Walston played Navy Seabee Luther Billis in the movie version of another Broadway hit, ``South Pacific,'' which he had performed on stage in London and with a road company.

The New Orleans native returned to musicals for a 1969 production of ``Paint Your Wagon.''

In a lengthy film career that began with the 1957 comedy ''Kiss Them For Me,'' with Cary Grant and Jayne Mansfield, Walston played mostly supporting parts, often as curmudgeonly characters.

One of his best film performances was as the philandering insurance executive in Billy Wilder's 1960 romantic comedy, ''The Apartment,'' starring Jack Lemmon, Shirley MacLaine and Fred MacMurray.

Wilder cast him again as a nervous, desperate songwriter opposite Dean Martin playing a womanizing crooner who has his sights on Walston's wife in the 1964 domestic comedy ``Kiss Me, Stupid.'' Walston got that part after Peter Sellers was felled by a heart attack.

Much later in his career, he played the strident social studies teacher Mr. Hand in the 1982 goofball comedy ``Fast Times at Ridgemont High,'' a role he reprised for the short-lived TV spinoff series ``Fast Times.''

But Walston is perhaps most widely recognized for the 1960s television series that made him a household name, ``My Favorite Martian,'' which ran for three years on CBS (1963-1966). He starred as a Martian who crash lands on Earth and moves in with newspaper reporter Tim O'Hara (Bill Bixby), who keeps the true identity of his visitor a secret by passing him off as his Uncle Martin.

Although Uncle Martin looked human and spoke English, he had such Martian traits as retractable antennae on the back of his head and the ability to make himself invisible, read minds and move objects by pointing at them. Three decades later, Walston played a small but nostalgic role in a 1999 movie version of the series with Christopher Lloyd starring as Uncle Martin.

In the movie, Walton appears as the mysterious government advisor Armitan (an anagram for Martian), who also turns out to be a stranded native of the Red Planet and ultimately returns with Lloyd to Mars.

Walston's career enjoyed a revival when he returned to series television in the early 1990s in the acclaimed CBS drama ''Picket Fences,'' playing a cranky judge with a heart of gold. The series earned him two Emmys for best supporting actor.

Have a question about My Favorite Martian, comment, trivia question, etc.? Then post your message on the:

My Favorite Martian Message Board

A TV Classic: My Favorite Martian

My Favorite Martian (Take Me to TV Land)

Wikipedia entry for My Favorite Martian