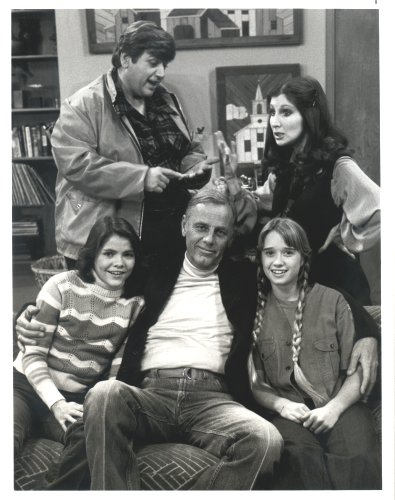 Following the breakup of his marriage, radio talk-show host Larry Alder moved from Los Angeles to Portland, Oregon, to get a fresh start.Ā He landed a job at radio station KLOW, where Morgan Winslow became the producer of his phone-in talk show.Ā Earl was Larry's obese engineer.Ā Larry had been given custody of his two daughters, 13-year-old Ruthie and 16-year-old Diane.Ā Glib and in total control on the air, he was much less sure of himself at home as the single parent of two maturing girls.Ā Leona, a school teacher and neighbor, tried to bring a little of the woman's touch to this chaotic household.Ā Larry's ex-wife Marion (Shelly Fabares) also turned up occasionally.Ā Added to the regular cast in the fall of 1979 were former Harlem Globetrotters basketball star Meadowlark Lemon, playing himself as owner of a sporting goods store, and Tommy, a 14-year-old neighbor.Ā In February 1980 Larry's retired father, Henry, also moved in.

Hello, Larry's time slot on the NBC schedule was right after the much more popularĀ

Diff'rent Strokes.Ā Since both shows were produced by Tandem Productions, and Larry needed a boost, it was established that Larry Alder and Diff'rent Strokes' Philip Drummond were old army buddies, and that Drummond's company had purchased the radio station where Larry worked.Ā The producers hoped that by having the casts of the two shows appear together in crossover episodes the much larger Diff'rent Strokes audience would be attracted to Hello, Larry.Ā It never happened.

ōThis is the Guinness Book of World Records . . . The Encyclopedia Britannica of television!ö ¢TV Guide

AMERICAÆS #1 BESTSELLING TELEVISION BOOK WITH MORE THAN HALF A MILLION COPIES IN PRINT¢ NOW REVISED AND UPDATED!

This is the must-have book for TV viewers in the new millennium¢the entire history of prime-time programs in one convenient volume. ItÆs a guide youÆll turn to again and again for information on every series ever telecast. There are entries for all the great shows, from evergreens like I Love Lucy, The Honeymooners, and Happy Days, to modern classics like Will & Grace, Buffy the Vampire Slayer, and Friends; all the gripping sci-fi series, from Captain Video and The X-Files to all versions of Star Trek; the popular serials, from Peyton Place to Dallas to DawsonÆs Creek; and the runaway hits on cable, including CNN, The Real World, The Osbournes, and Sponge Bob Square Pants. This comprehensive guide lists every program alphabetically and includes a complete broadcast history, cast, and engaging plot summary¢ along with exciting behind-the-scenes stories about the shows and the stars.

MORE THAN 500 ALL-NEW LISTINGS, from Survivor and The Bachelor to C.S.I. and The West Wing.
UPDATES ON CONTINUING SHOWS, such as ER, Frasier, 7th Heaven, and The Simpsons.
EXTENSIVE CABLE COVERAGE of more than 800 entries, including a description of the programming on each major cable network.
BRAND-NEW IN THIS EDITION¢an exclusive ōPh.D. Trivia Quizö of two hundred questions to challenge even the most ardent TV fan; plus a streamlined guide to TV-related Web sites for all those who want to be constantly up-to-date.

Total number of episodes: 35 (41 if you count the crossovers with Diff'rent Strokes)
Ā

For an episode guide with brief summaries and guest stars for most of the episodes, click here

- great page devoted to the series; includes episode summaries and much more


For hundreds and hundreds of sitcom links, please visit my main page: