Family Ties Online - all Family Ties, all the time... Loving parents Steven (Michael Gross) and Elyse Keaton (Meredith Baxter Birney) raise their kids with open hearts and open minds. Growing up in the 1960s, Mom and Dad share a liberal point of view, and guide their family with the ideals and convictions of flower power at its best. Their offspring, however, have different ideas. Eldest son Alex P. Keaton is an over-achieving, hard-core Republican, and clashes with his parents at every turn. Mallory is a fashion-loving, boy-crazy teen stuggling through high school, while little sister Jennifer is the precocious tomboy who always speaks her mind. Together, they share the moments that make them laugh, make them cry...and make them family.

Read our review of Family Ties - The First Season on DVD Family Ties flipped the typical sitcom dynamic on is head. Instead of conservative parents butting heads with rebellious kids, the heart of the series is the generation gap between former hippie parents and their square offspring. The second season highlights the culture gap between Steven (Michael Gross) and Elyse Keaton (Meredith Baxter Birney) and their three children: staunchly Republican Alex (Michael J. Fox), fashion-mad Mallory (Justine Bateman) and precocious Jennifer (Tina Yothers), as they tackle pre-marital sex, women's rights, and alcoholism. Get reacquainted with the Keatons and their nurturing blend of politics and punchlines in Family Ties: The Second Season.

Special Features: The Making of Family Ties, Michael J. Fox: The Best Gig In The World, The Year of The Beard, Episodic Promos

Read our review of Family Ties - The Second Season on DVD The mellow 1960s still clash with the conservative 1980s in the "generation gap" comedy Family Ties. But by Season Three, the Keatons of Ohio finally agree on one thing - their joy at the birth of baby brother Andrew! The hit series gives us the funniest season yet as Elyse (Meredith Baxter Birney) tells Steven (Michael Gross) she is pregnant, and the family suffers through food cravings, Lamaze classes, and Elyse going into labor in television during Pledge Week! Plus, Alex (Michael J. Fox) starts college, Mallory (Justine Bateman) gets a job she is actually good at, and Jennifer (Tina Yothers) discovers boys! Now with the new baby around, no one minds being bound for Family Ties!

Read our review of Family Ties - The Third Season on DVD The smash hit series Family Ties offers the perfect premise for great comedy, and by Season Four the two battling generations of Keatons still possess a nurturing blend of laughter and heart. Now a college sophomore, Alex (Emmy winner Michael J. Fox) falls in love with Ellen, a girl who's his total opposite. And Mallory (Justine Bateman) falls for Nick, a junkyard sculptor who's her intellectual equal! But it's young Jennifer (Tina Yothers) who feels off-balance, as she grows closer to mom Elyse (Meredith Baxter Birney) but more distant from dad Steven (Michael Gross) now that's she becoming a teenager. But even with their older kids changing - and as baby Andrew's diapers still need changing - the Keaton parents know their four kids will always be bound by Family Ties!

Read our review of Family Ties - The Fourth Season on DVD In Family Ties: The Fifth Season, Steven (Michael Gross) and Elyse Keaton (Meredith Baxter Birney) still embody the spirit of the 1960s, while suppoerting their kids - Alex (Emmy winner Michael J. Fox), Mallory (Justine Bateman), Jennifer (Tina Yothers) and young son Andrew (Brian Bonsall) - in the more conservative 1980s. This season, the Keaton parents have learned to accept the fact that they are practically grown up, with lives of their own: Alex is a junior in college and has a bank job; Jennifer fronts an all-girl rock band; and Mallory has left the mall behind for college, where she studies - what else? - fashion! But whatever era they support, the Keatons will always support each other - on Family Ties!

Read our review of Family Ties - The Fifth Season on DVD Read our review of Family Ties - The Sixth Season on DVD Family Ties - The Seventh and Final Season is the emotional conclusion to one of America's most beloved 1980s sitcoms. In this season, the Keatons' world is turned upside down when Steven (Michael Gross) suffers a heart attack and has to undergo open-heart surgery. Mom Elyse's (Meredith Baxter Birney) strength keeps her family rock steady, but she struggles with her children growing up and moving on. While Jennifer (Tina Yothers) learns to drive and rallies the troops to save the environment, Mallory (Justine Bateman) gets her big break in the world of fashion design and Andy (Brian Bonsall) creates a time capsule that sends the family down memory lane. Finally, the family and girlfriend Lauren (Courteney Cox) say goodbye to Alex (Emmy winner Michael J. Fox) as he moves to NYC to pursue a career on Wall Street. As this iconic TV series comes to a close in a 24-episdoe, 4-disc collection, families everywhere can relive their favorite heartwarming and laugh-filled moments with the one-and-only Keaton family.

Purchase Family Ties - The Seventh and Final Season on DVD In Family Ties, Steven Keaton (Michael Gross) and Elyse Keaton (Meredith Baxter Birney) are products of the 1960's and have become open-minded parents. To their surprise, their children have become conservative and capitalistic growing up in the 1980's. This highly successful comedy series follows this unique American family as their views on politics and life clash to give us humorous family moments.

Please visit our message board regularly for the most up-to-date news, articles and cast updates.

reports that the first season of Family Ties is set to be released on DVD by Paramount sometime in the first half of 2005. More details will be available in the coming weeks and months.

Starting in January, Family Ties will air on TV Land at (times ET/PT): TV Land will be airing all three Christmas episodes this year in it's annual 48 hour Merry-thon.

4:00PM Family Ties #14 "A Christmas Story" (aka Christmas Show) When their ski trip is postponed by a snowstorm, the Keatons sit home by the fire, where Steven and Elyse share memories of their children's births.

5:00PM Family Ties #145 "Miracle In Columbus" The Christmas spirit has come to the Keaton house, where the family is busy baking Christmas cookies when Skippy stops by to ask a favor. He wants Alex to pinch-hit for him as Santa at the mall, and Alex agrees after hearing about the excellent hourly wage.

11:00PM Family Ties #14 "A Christmas Story" (aka Christmas Show) When their ski trip is postponed by a snowstorm, the Keatons sit home by the fire, where Steven and Elyse share memories of their children's births.

12:00AM Family Ties #145 "Miracle In Columbus" The Christmas spirit has come to the Keaton house, where the family is busy baking Christmas cookies when Skippy stops by to ask a favor. He wants Alex to pinch-hit for him as Santa at the mall, and Alex agrees after hearing about the excellent hourly wage.

A funny, highly personal, gorgeously written account of what it’s like to be a 30-year-old man who is told he has an 80-year-old’s disease.

"Life is great. Sometimes, though, you just have to put up with a little more crap." --Michael J. Fox

In September 1998, Michael J. Fox stunned the world by announcing he had been diagnosed with Parkinson’s disease -- a degenerative neurological condition. In fact, he had been secretly fighting it for seven years. The worldwide response was staggering. Fortunately, he had accepted the diagnosis and by the time the public started grieving for him, he had stopped grieving for himself. Now, with the same passion, humor, and energy that Fox has invested in his dozens of performances over the last 18 years, he tells the story of his life, his career, and his campaign to find a cure for Parkinson’s.

Combining his trademark ironic sensibility and keen sense of the absurd, he recounts his life -- from his childhood in a small town in western Canada to his meteoric rise in film and television which made him a worldwide celebrity. Most importantly however, he writes of the last 10 years, during which -- with the unswerving support of his wife, family, and friends -- he has dealt with his illness. He talks about what Parkinson’s has given him: the chance to appreciate a wonderful life and career, and the opportunity to help search for a cure and spread public awareness of the disease. He is a very lucky man, indeed.

Many of the cast photos courtesy of the: Meredith Baxter Fan Club site

This site uses frames, if you don't see the frame to the left - click here

Please send any comments, questions, additional information, or pictures to me at the e-mail address below:

For hundreds and hundreds of sitcom links, please visit my main page: 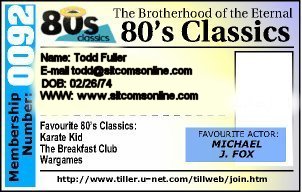