This section contains trivia questions and answers about the show. 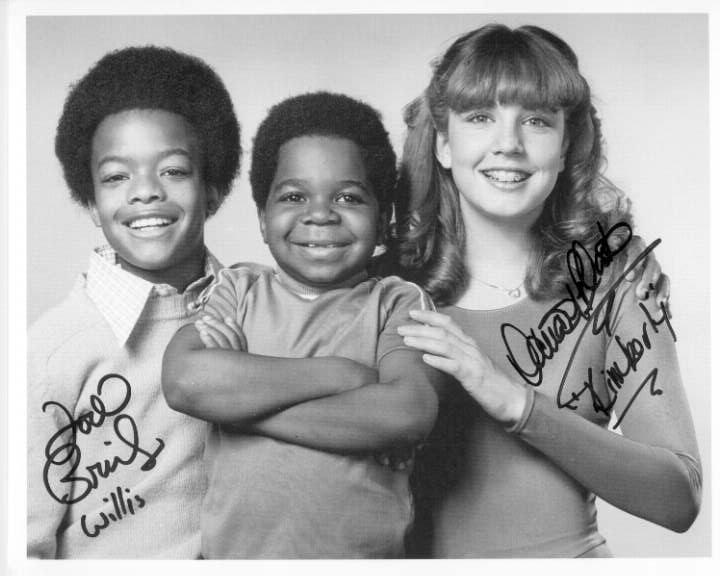 #27
Question: What were Willis' and Arnold's African names in the 'Roots' episode?

#25
Question: Who was the bully in Willis' high school?

#24
Question: How many episodes of the Facts of Life does any any cast member of Diff'rent Strokes appear in?

#23
Question: What is the name of the company that Mr. Drummond was employed at?

#22
Question: What's the title of the Diff'rent Strokes spin-off?

#21
Question: I went through the episode listing, and didn't see an episode I could have SWORN I once watched. It involved Willis fighting The Gooch and getting hospitalized. Am I crazy?

#20
Question: For a few months now, my brother and a friend of ours have been debating whether or not at any time during the Diff'rent Strokes series Arnold added the Drummond name after Jackson or replaced Jackson with Drummond. There is no doubt Mr. Drummond adopted the boys, but were Arnold or Willis ever considered Drummonds or did they always remain Jacksons??

#19
Question: What color hair did Kimberly's hair turn when she washed it with the rain?

#18
Question: What was the name of Arnold's Paddington Bear, I remember it had strawberry jam on the elbow, and Willis (actually it was Kimberly) gave it away to charity?

#17
Question: What happened on the last episode of Diff'rent Strokes?

#16
Question: What was the name of the elite school that Mr. Drummond attended that refused to admit Willis and Arnold and used a socially biased test to exclude them?

#15
Question: In the first season, Willis had some problems in History class remembering events from a specific year. Mr. Drummond went so far as to hire a tutor for Willis. What was the year he couldn't remember from and why was he so forgetful?

#14
Question: My friend disagrees with me that Arnold was once electrocuted in the school yard. He fell to the floor and everyone thought that he was kidding, but he really was injured. Can you please let me know if this episode existed?

#13
Question: What are the names of the housekeepers?

#12
Question: What was the name of the boarding school that Kimberly attended?

#11
Question: Who played Bill the kidnapper in the episode where Arnold and Kimberly hitchhiked?

#10
Question: What's the name (real and show name) of the redheaded son of Dixie Carter when she married Mr. Drummond in the series?

#9
Question: What was the apartment number where they lived on Park Avenue?

#8
Question: Could you please tell me the name of the actor who played The Gooch?

#7
Question: What was the name of the product people in Harlem used to ward off robbers? Mrs. Garrett carried this product with her to Willis' party in Harlem.

#6
Question: What was the name of Sam's goldfish?

#5
Question: What was Arnold and Willis' mother's name?

#4
Question: Although the daughter of a rich father (Phillip Drummond), Kimberly wanted to make money on her own.  She supplemented her weekly ten-dollar allowance by taking an after-school job at what fast-food store in Manhattan?

#3
Question: Arnold and Willis Jackson were the two brothers Phillip adopted.  Arnold, the younger, more mischievous one, had a ratty old doll named Homer, a cricket named Lucky, and a goldfish.  What did he call the fish?

#2
Question: Arnold loved model railroading and video games.  He had his railroad empire set up in his bedroom and he was the champ at what game at the Video Arcade?

#1
Question: While he attended a number of different grammar schools, one thing plagued Arnold no matter which one it was--the school bully.  What was the bully's name?

#27
Hasani and Abubuka (unsure of the spelling)

#21
No, you are certainly not crazy - a little delirious maybe... It wasn't The Gooch who beat up Willis and hospitalized him, but 2 bullies that threatened Arnold and Dudley at school (episodes: Crime Story).

#17
There was no 'goodbye' episode of Diff'rent Strokes. They probably did not know or think that they were going to be canceled for the next season.

#8
The Gooch was never seen.