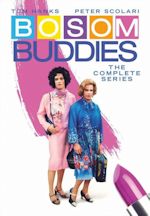 Kip and Henry work at an advertising agency as an artist and writer respectively. When the apartment that they were living in was condemned, they had no place to live. So Amy their co-worker, who has a crush on Henry, suggests that they stay with her but the only the problem is that it's for girls only. So they get into drag and assume the personas of Buffy and Hildegarde. When Kip meets Sonny, Amy's attractive roommate, he is smitten and when they learn that there's a vacancy in the building, Kip convinces Henry to take it so he can be close to Sonny, and so that this experience might be good material for a book that Henry can write.

How far would you go to be near the woman of your dreams? The hit series Bosom Buddies stars Tom Hanks and Peter Scolari as ad execs Kip Wilson and Henry Desmond, who dress as "Buffy" and "Hildegarde" in order to live in the all-female Susan B. Anthony Hotel. This season, their lives get further complicated when they start a commercial production house with former boss Ruth Dunbar (Holland Taylor), along with their best friend Amy (Wendie Jo Sperbber), who still has a crush on Henry. And although Kip has finally won over his beloved Sonny (Donna Dixon), he and Henry are still forced by new hotel manager Isabelle (Telma Hopkins) to change gender at a moment's notice! Includes all 18 classic episodes from the show's secon season, on DVD for the first time ever! Released September 4, 2007.