Benson - one of over 70 different sitcom pages from Sitcoms Online 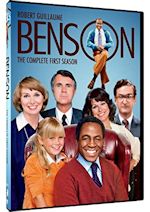 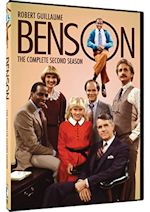 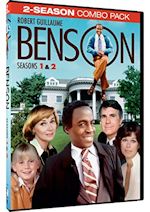 Culver City, CA (May 14, 2007) – Created by television powerhouse Susan Harris (TV’s “The Golden Girls”) and starring five-time Emmy nominee Robert Guillaume, Benson: The Complete First Season makes its DVD debut on July 24 from Sony Pictures Home Entertainment. The collection features all 24 politically-flavored episodes from the long-running comedy series’ first season in a three-disc set. The exclusive bonus materials include a video introduction by Guillaume, a Benson series retrospective, and a photo gallery. The DVD will be available for $29.95 SRP.

Robert Guillaume played one of the most popular supporting characters on Soap, as the insolent butler to wacky Jessica Tate (the brilliant Katherine Helmond, who makes a guest appearance this season). His scene-stealing portrayal of the acerbic character resulted in his winning a Best Supporting Actor Emmy (he would be nominated five more times as Best Actor, winning another statuette in 1985). ABC spun the character off into the title role in Benson, debuting on September 13, 1979. The premise entailed Jessica sending Benson off to help her inept cousin, Governor James Gatling (James Noble), run the Governor’s mansion. Other characters included Katie Gatling (Missy Gold), the governor's adorable daughter; Benson’s nemesis Gretchen Kraus (Inga Swenson), the stern German housekeeper; Marcy Hill (Caroline McWilliams), the governor's secretary; and John Taylor (Lewis J. Stadlen), the governor’s political aide.

Over the course of its 7-season, 158-episode run, Benson was nominated for a total of 17 Emmy Awards, winning three, as well as four Golden Globe nominations (including three Best Actor nods for Guillaume).

Benson: The Complete First Season has a run time of approximately 597 minutes and is not rated.

The brand new episode of pop culture podcast "Just My Show" is now available for listening. The show features an interview with the governor himself, James Noble. He talks all about getting the part, who he really thinks won the election between he and Benson, and lots more. (The show also features in interview with Robert Pine from "CHiPs.")

Here's the direct link to this page:
http://www.justmyshow.com/showeight.html

The main page of the site is simply www.justmyshow.com.

If you're a TV fan, you may like some other things going on at the site as well, including all the previous shows that are still available for listening in the "reruns" section.

All shows are completely free and can be listened to right on the site or downloaded as an MP3. (You do not need an iPod to listen)

Hope you enjoy it! Thanks!

Have a question about Benson, comment, trivia question, update on the cast members, etc.? Then post your message on the: In this spin-off from Soap, Benson the black butler--the only sane member of the Tate household--was sent by Jessica Tate to help her widowed cousin, Gov. James Gatling. Benson found himself from one loony bin to another.

Gov. Gatling was a sweet, well-meaning man, but terribly naive; Katie, his precocious daughter; Gretchen, the formidable German housekeeper; and Marcy, his secretary (married in a February 1981 episode). Benson, though theoretically only in charge of the governor's household, kept order around the executive mansion, did constant battle with Gretchen, helped raise little Katie, and generally assisted the meek governor in deciding what to do, both politically and personally. Of less help to the chief executive were his political aide Taylor (replaced by Clayton), bumbling press assistant Pete, and messengerboy Frankie.

In 1981 Benson was appointed state budget director, giving him added responsibilities as well as his own secretary, Denise (who later married Pete). The promotion came just in time for Benson to help the governor in his campaign for a second term, which fortunately for the series he won, as an Independent--after his party dumped him. Benson's former employee, Jessica Tate, showed up in ghostly form in 1983 to remind him how far he had progressed. Benson's remarkable rise continued. In 1984 he was elected Lieutenant Governor, and in 1986--in the series' final original episodes--he ran against his mentor Gov. Gatling for the governorship itself, with his new fiancee Diane serving as his campaign manager. The bitter campaign strained the two men's friendship, but in the end they reconciled, reminisced, and settle in to watch the election results together. In true TV cliffhanger tradition, the outcome was not revealed, so viewers never did find out who won. However one thing was clear--Benson the insolent butler had come a long way.

The series was on the air seven years, longer than the show from which it was spun-off, Soap (1977), which lasted four years.

The series ended with a cliffhanger that was never resolved. It the series, Benson worked for the governor of a southern state. In the final episode, Benson ran against his boss for the job and the show ended before the election results were announced.

Did You Know? Facts from The Internet Movie Database

Have a question about Benson, comment, trivia question, update on the cast members, etc.? Then post your message on the: