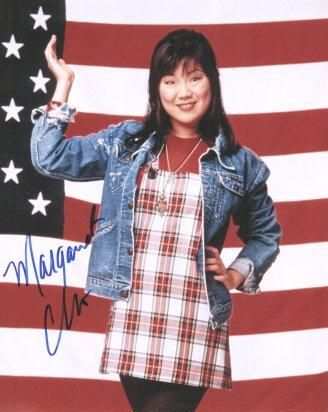 LOS ANGELES, CA – "All-American Girl," the groundbreaking sitcom inspired by the life and comedy of Margaret Cho, debuts on DVD January 31st via Shout! Factory. The four- disc set includes all 19 half-hour episodes which originally aired on ABC during the ’94 -‘95 television season. Stand-up comedian Margaret Cho plays Margaret Kim in this insightful comedy about a young, second-generation Korean American, torn between two very different cultures. Featuring new audio commentaries by Cho and the actress who played "Grandma," Amy Hill (Cheaper by the Dozen, The Cat in the Hat), this entertaining sitcom brings an Asian American family to TV for the first time, allowing viewers a comic glimpse of the culture clash between the Americanized Cho and her traditional family.

Along with Cho and Hill, "All American Girl" stars B.D. Wong (Broadway production of M. Butterfly, "Oz," Father of the Bride II), and features a large supporting cast and such notable guest stars as Oprah Winfrey, David Cross ("Arrested Development"), actor/director Quentin Tarantino (Kill Bill, Pulp Fiction) and Jack Black (School of Rock, Shallow Hal). As Kim, Cho broaches topics ranging from bringing home non-Asian boyfriends to sibling rivalry with her overachieving brother. Constantly testing the limits of her parents' patience, she chooses a lifestyle opposed to their traditional values, wears short skirts to flaunt her westernized attitude and generally pushes her mother’s buttons every chance she gets. In addition to new audio commentary, the DVD contains a discussion with Cho and Hill on topics ranging from initial casting debates and racial dynamics on television to the reaction of the Asian American community to the show. Their chat illustrates an honest glimpse of life on the set and behind the scenes.

is The World's Online Marketplace. Buy and Sell items in thousands of categories.
Register your free eBay user account and start bidding within minutes! Culture-clash comedy about a hip, thoroughly assimilated Korean-American girl and her very traditional mother. Twenty-one-year-old Margaret and her mother, Katherine, fought constantly, mostly over dates; Mom wanted her to become the deferential wife of some nice Korean boy, while Margaret favored Caucasians in leather biker garb. Stuart was Margaret's Goody Two-shoes older brother, engaged and studying to become a cardiologist while deferentially spending most of his time at his parents'. Eric, the younger brother, looked up to his sister, much to Mom's chagrin. Dad (Benny) just ducked for cover as the women lobbed one-liners at each other.

The scene alternated between the Kims' nice white town house, their family business ("Kim's Books"), and the department store where Margaret worked at a cosmetics counter, all presumably in San Francisco. Ruthie and Gloria were coworkers who egged Margaret on. Another unexpected ally was Grandma, a stereotype-buster in her younger days, who was now either senile or very wise. A Tribute to Margaret Cho